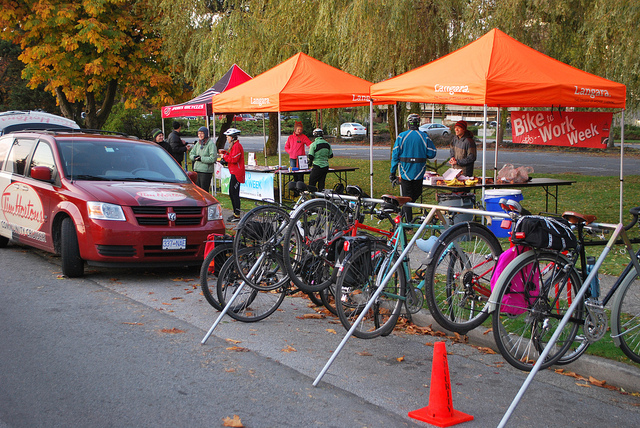 How are you getting to Langara? Consider riding your bike to get to work.

Bicycling is a healthy, inexpensive, environmentally-friendly, and enjoyable commute choice. The College is situated near several traffic-calmed bicycle routes including the Ontario Greenway and the 45th and 59th Avenue bikeways to make it easy and safer for riders to commute. At regular speeds of 10 to 20 kilometres an hour, riders can reach their destination sometimes more quickly than in a vehicle locked in traffic.

Bicycling can be combined with transit use.

There is no additional charge for bicycles on buses and SkyTrain.

Where to park your bike:
On campus, we have bike racks to lock up your bicycle. Outdoor covered bike racks are located at the northeast corner of Building A, on the south side of Building B, on the north side of the gymnasium and at the southeast corner of the Library. We also have a bicycle parking cage located on level P1 of the underground parkade for those who prefer more security.

What else should I know?

For help with bicycle route planning or finding someone you can cycle with, contact Fulton (ftom@langara.ca).

Applications now open for students to work in India, Jan–Apr, 2020.

Vote for staff representatives on EdCo

Voting for your Staff Representatives on Education Council (EdCo) is available between 9:30 am on…

During Summer Intersession, Chartwells' hours will be changing. These hours apply to the days between…