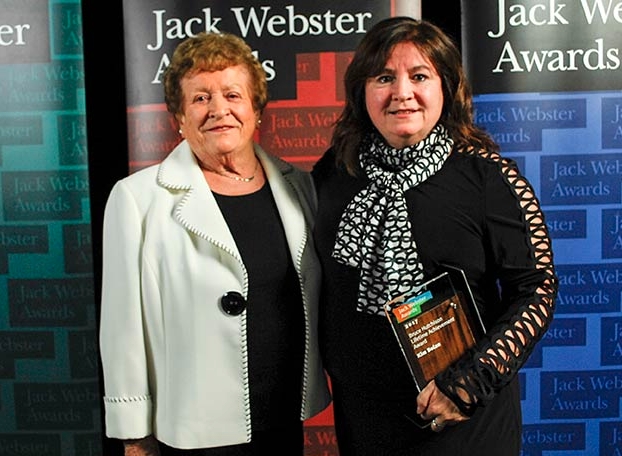 The Langara Journalism program was well represented at last week’s annual Webster Awards. The Jack Webster Foundation was established in 1986 to recognize excellence in journalism in British Columbia.

For the third consecutive year, the Bruce Hutchison Lifetime Achievement Award went to a nominee connected to Langara. Following Shelley Fralic (2016) and Gary Mason (2015), instructor Kim Bolan received the award at this year’s ceremony. Bolan is known for her outstanding reporting covering topic such as the Air India terrorist bombing, organized crime in B.C. and the on-going issue of gang violence. Her career has spanned 33 years so far, all at The Vancouver Sun. She was also nominated in Best Breaking News Reporting – Print for her story, Death of an Angel.

Three Langara alumni were also award winners. Justine Hunter (1987) was part of a team from The Globe and Mail who won the Excellence in Digital Journalism award. Mike Hager (2011) and colleagues from The Globe and Mail won Best Breaking News Reporting of the Year – Print. Finally, Michele Brunoro and her team from CTV Vancouver were winners for Excellence in Feature/Enterprise Reporting – Television. Former photojournalism student Amanda Siebert of the Georgia Straight won for Excellence in Feature/Enterprise Reporting – Print.

For more information on the Webster nominees, read more.

Please join me in congratulating Maggie Stewart, who has been awarded the 2017 IMPACT Award…