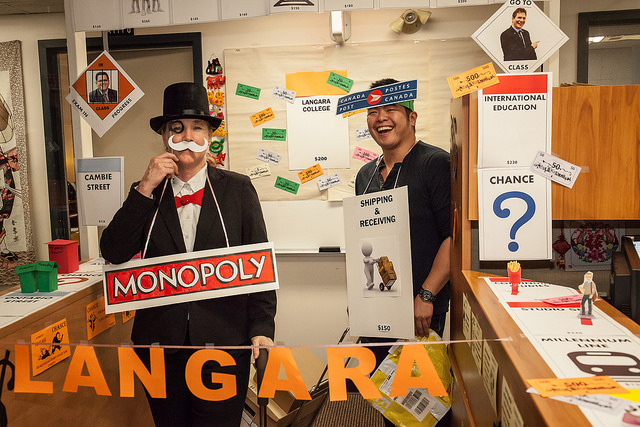 Best Department Costumes:  IE Homestay invited the judges to play a game of Monopoly, Langara edition! Monopoly was brought to life with department members dressing up as Rich Uncle Pennybags who took center stage and Jake the Jailbird who was stuck in class writing an exam. With modified game square pieces such as graduation and facilities, their respective costumes matched with a graduating student in a gown and cap, and a construction worker. Another notable moment included a picture of Lane Trotter, President & CEO stating ‘Go to Class’ instead of the bailor advising you to ‘Go to Jail’!

Best Decorated Department:  Registrar and Enrolment Services paid homage to Stephen King aka “The King of Horror” with references to his movies such as IT, Shining, Carrie and Pet Sematary; complete with a theatrical experience. Jack (‘Here’s Johnny!)’, the Grady twins (‘come play with us’), Pennywise aka ‘the dancing clown’, and teenage Carrie White all made an appearance in this horror tribute! Redrum anyone?

These two departments did an amazing job and are the reigning champions in their respective categories two years in a row! Honorable mention goes to: Communications & Marketing, People Services (Human Resources, Payroll and Benefits), Deans’ Office, and Co-op & Career Development Centre.

Thank you to everyone who participated, especially our brave judges who took time out of their busy schedules:

… and last but not least a thank you also goes to our Photographer, Jen Oehler who made the rounds with the judges in a voluminous southern belle dress! She raised the bar of taking photos to a whole a new level!

Click here to view all the ghoulishly good fun! Until next year contestants……

Effective Thursday, May 17, 2018 the following changes to the BC Employment Standards Act came…