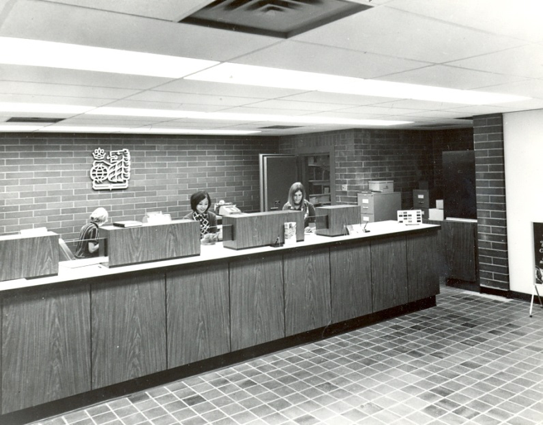 Did you know that there used to be an RBC branch on campus 49 years ago? The picture above is a snapshot of RBC Royal Bank and Langara College’s shared history. The newly discovered photo, found in the RBC archives, is of a branch on 49th Avenue that would later become part of the Langara Campus.

Back in December 1970, RBC opened its City College branch, a traditional full service branch that served as a sister hub to the Cambie and 57th location. In 1975, after an overhaul of several RBC branches in the area, the then-named Langara College location became a sub-branch of the Main and 49th location. On July 30, 1976, after six great years of serving the Langara Community, the branch officially closed. Fast forward 49 years to present day, the shared history between the bank and the institution has been happily renewed – just in time for the College’s 49th anniversary celebrations.

As the proud presenting partner at Community Day, RBC will have some engaging activations on campus. First up is the RBC Community Truck, a mobile activation vehicle that converts into an interactive centre equipped with a selfie-station (bring your colleagues – it can accommodate group shots!). An RBC-sponsored environmentally friendly water station will be set up to support the Community Day theme of sustainability. The RBC on Campus hub will be open throughout the day to field questions, and additional archival photos of the original branch will be on display. Last but not least, a face-painting booth will be set up for kids of all ages! RBC has evolved into much more than just a bank on campus. The new RBC on Campus hub opened its metaphorical doors nearly a year ago. First located as a pop-up stall in the T-Building, the permanent location has now moved to the A-Building by Continuing Studies. Although it is a fully functional branch, the On Campus hub is first and foremost an education centre. The focus is to promote financial literacy, deliver career opportunities, and be a community partner. A lot of the hub’s events and workshops are conducted in partnership with various departments and student clubs in Langara – such as Tech Thursday, Morning Mingle, De-Stress Fest, Pink Shirt Day, and Club Day – with the aim to add additional value to the experience.

Besides community involvement, the team at RBC on Campus host a variety of independent workshops and events based around financial literacy and career development. Some of their past events include a networking session with recruiters from RBC, free tax advice from accredited CPAs and much more. The space in the A-Building also doubles as a study centre and a hangout spot where everyone is welcome regardless of which financial institution you bank with.

Reconnect with former colleagues and classmates. Langara Alumni and Community Engagement is bringing the "community"…

Call for readers: Strangers on a Train Nov 21

Strangers on a Train is currently seeking readers for our next event on November 21.…