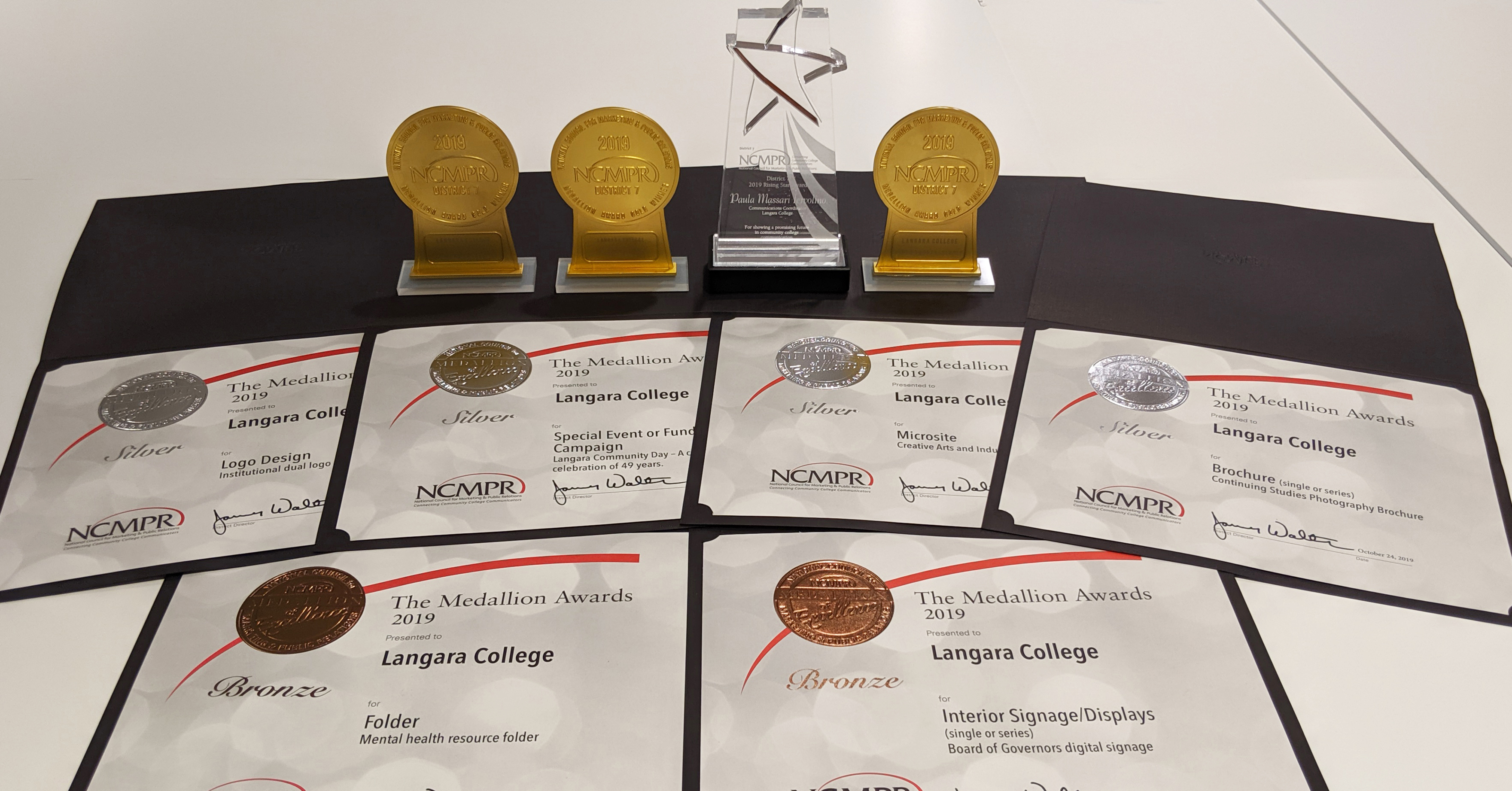 The Langara Communications and Marketing team received 10 Medallion Awards at the National Council for Marketing & Public Relations (NCMPR) District 7 conference on October 23 to 25 for work completed over 2018-19. The Medallion Awards recognize outstanding achievement in communications at community and technical colleges in the pacific northwest (Alberta, British Columbia, Saskatchewan, Yukon Territory, Alaska, Idaho, Montana, Oregon, and Washington). It’s the only regional competition of its kind that honours excellence exclusively among marketing and PR professionals at two-year colleges.

Gold – Beyond 49 anniversary campaign video; Love Beyond 49 (Beyond 49 social media campaign for Valentine’s Day); and Then, Now, and Beyond exhibit

Bronze – Board of Governors digital signage; and Mental Health folder

In addition, Paula Massari Iervolino, Communications Coordinator, was awarded the District 7 Rising Star Award for her individual contributions to the department. The Rising Star Award recognizes newcomers who have demonstrated special creativity or ability in marketing and public relations, and show evidence of a promising future in the field. It is awarded annually in each of NCMPR’s seven districts, and district winners automatically qualify for consideration for the national award. Congratulations, Paula!

NCMPR is the only organization of its kind that exclusively represents marketing and public relations professionals at community and technical colleges.  As one of the fastest-growing affiliates of the American Association of Community Colleges, NCMPR has more than 1,700 members from nearly 650 colleges across the United States and Canada.

C&M would like to thank all of our colleagues across campus who collaborated on these projects with us.

As it has for more than two decades, Langara College continues to support the United…

Are your students having difficulties with their written assignments? Langara offers students two free tutoring…

This is your chance to have a say regarding the future of internationalization at Langara.
Recent Posts
Categories
Archives
I am the footer call-to-action block, here you can add some relevant/important information about your company or product. I can be disabled in the theme options.
Get In Touch
Copyright Your Business LLC. - All Rights Reserved
Back To Top