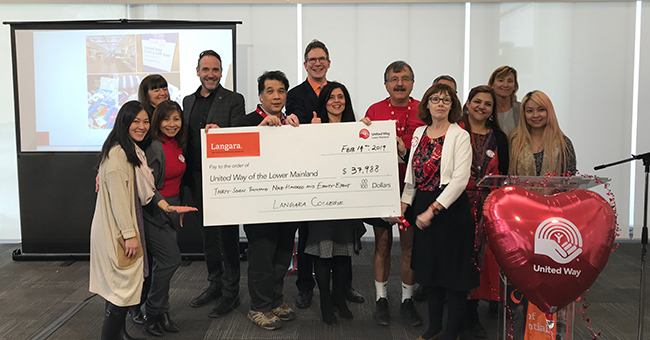 At its first ever Donor and Volunteer Appreciation Tea held on Tuesday, February 14, the Langara United Way Employee Committee members were pleased to present a cheque for $37,988 to support the United Way of Lower Mainland. The 2018 total is the highest in recent years – nearly reaching the campaign’s $40,000 goal. Since 1991, the Langara Employee United Way Committee has raised close to $700,000 supporting the local United Way which works with over 150 agencies and 450 programs to support and advocate for children, youth and seniors in need. Funds raised in 2018 came from well-attended events such as hot dog sales, craft fairs featuring local artisans, a lost and found sale, and more. In addition, employees and faculty support the campaign with donations.

As in previous years, designated Langara scholarships and bursaries received half of the amount raised from campaign events. Due to the overwhelming success of the 2018 events, the United Way campaign directed $9421 to two scholarships established in the name of former instructors. A new record!

The Langara College United Way Campaign is an annual workplace campaign that incorporates a range of events for students, staff and faculty to help raise funds for a great cause.

A Goods Swap reduces waste by facilitating the reuse of unwanted goods. In the summer…

I am excited to share that Ronald Au has accepted the temporary Manager, Budget Analysis…